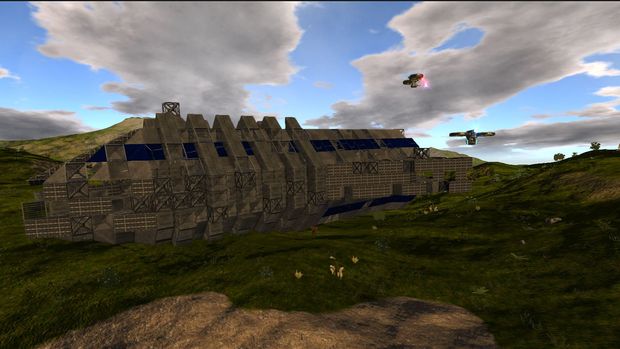 The MS Titan is a ship which was built on Earth and was the vessel which brought the player to the Andromeda Galaxy. According to the background story of Empyrion, the player was the commander of the MS Titan as part of a large fleet participating in Operation Phoenix. There was a malfunction with the MS Titan, however, separating it from the rest of the human fleet when it attempted to use its hyperdrive. When the ship exited its warp, it was unable to maneuver and isolated from the fleet. It drifted into the orbit of Akua and crashed on the surface, killing all aboard except the player who jettisons the ship via an escape pod. On entering Akua's atmosphere, the MS Titan broke into three pieces, as a player can discover the rear, middle, and front sections as Points of Interest on Akua. The wreckage of the Titan is guarded by smaller drones. There are no hostile aliens or turrets inside the ship, and an Alien Troop Transport does not appear when a player explores a section of the crashed Titan.

The Titan contains several cargo boxes which contain random loot inside them. Loot can be a tier 1 weapon, ammunition, crafting parts, or any ore or ingot of any kind, excluding Sathium, Erestrum, and Zascosium.