Movement is an important game-play mechanics as exploration is one of the most important aspect of Empyrion: Galactic Survival gameplay. There are multiple ways to move around the Empyrion Universe and Maps so players do not get lost.

Player can jump using Spacebar. Jump height is determined by the gravity of the planet. 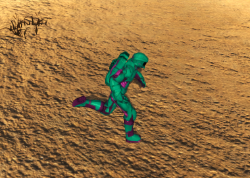 A player can swim in the water if the water is deep enough and player’s hand is empty. An empty handed player by default floats on the water, unless they manually get underwater or starts under water. Players can move around with W,A,S,D key and swim fast with Shift. Players can increase and decrease their depth underwater by using C and Spacebar respectively. 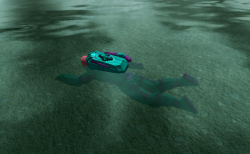 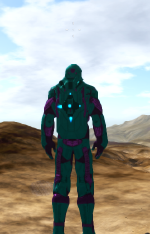 Jetpack at back of the player

Players are equipped with a jetpack on their suit. The jetpack has limited amount of fuel which regenerates automatically when not in use.

On the surface of a planet (or environment with gravity), the jetpack can only be used for assisting jumps. Pressing J key will switch the jetpack on or off. Holding Spacebar will launch player  up in the air until the fuel is depleted. The height a player can reach is determined by the gravity of the planet.

The Hover Vessel is the most basic mode of vessel transportation in Empyrion: Galactic Survival. The player needs to build a Hover Vessel to get this mode of transportation. A Hover Vessel has a maximum cruising speed of 20 m/s and can hover a maximum of 3m above the ground. Hover Vessels cannot go to or function in space, but can dock with Capital Vessel which can transport them to other planets or moons.

The movement of Hover vessels are controlled by pressing W,A,S,D for forward, backward and sideways motion; Spacebar,C keys use for increase and decrease hover height; Shift+Spacebarf to make short boosted jumps and Control+Shift to flip the vessel if the vessel is upside-down. Y is used for turning the vessel on and off, T to turn the lights on and off and P to access the control Panel.

The movement of Small and Capital vessels are controlled by pressing W,A,S,D for forward, backward and sideways motion; Spacebar and C are used for move up and down movement; Q,E used to roll left and right. T is used for turning the vessel on and off, F to turn the lights on and off and P to access the control Panel.

Warp is the most advanced form of travelling which is use for travel between planets. Only Capital Vessels with Warp Drive can make warp jump. To know about warp see Warp.

There are two types of map in Empyrion: Galactic Survival for ease of navigation :

Default Key : M
The map is opened by pressing M. You can switch between the Planet, Orbit, System and Galaxy modes (see image below). The map window shows the playfield the player currently is in when Planet or Orbit map is selected. The various Points of Interests are shown in the map via the map legend (see image below). The points of interest shown in the map are:

The minimap is always shown in the top right corner of the HUD. The minimap shows no terrain features, it only show the locations of a POI in the 300m radius around the player. It also shows the direction of the POIs up to a distance of 500m by showing the appropriate icons snapped to the edge of the map.
The minimap in space shows a (x,z) plane in y-axis, unlike the plane in the Orbital Map which is always at y=0, the plane in minimap is shown at the level of player and all other objects y-axis location (up-down) are shown relative to the player (i.e. if an object/POI is above the player, a line is shown underneath it and if it is below the player, a line is shown above it). Unlike minimap in planet, minimap in orbit shows everything in orbit and the distance shown in a logarithmic scale (i.e. further the object is, the more the distance is compressed).

There are various visual cues shown in the HUD to help in navigation.