The Sentry Gun is set to auto-fire by default. The player can directly control it by pressing 'F' when standing next to it.

The Projectile Rifle Round ammo is automatically reloaded from an Ammo Box. This could be a Small Ammo Box or a Large Ammo Box.

Note: While the player can control the turret, it does not turn or shoot (either controlled or automatically) if the base is not powered! 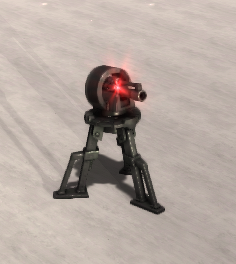